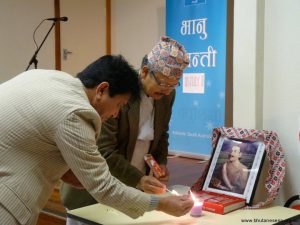 It was far from their country. Life is mechanical and people rarely get time to talk in their language. Still, love and affection to mother tongue remain alive among Nepali speaking community in Adelaide, Australia.

Enthusiasm seen during the 198th Bhanu Jayanti celebration here vividly reflected this affection among Nepalese and Bhutanese community in Australia. And in majority, subject matter of the creations was their land of birth.

The celebration was jointly organised by Bhutanese Association in South Australia (BASA) and International Nepali Literary Society (INLS) Australia chapter. This was the first time two community joined hands to remember the first poet of Nepali literature – the string to bind them together.

Over 60 people from the two communities attended the function and 16 people recited their creations. Raju Upadhyaya’s poem was judged the top among them. Upadhyaya now will be participating in the international Nepali poem recitation competition later this month hosted by the INLS Headquarter coinciding with the second international literary festival in London.

Narayan Bhattarai was judged second and Indukesh Pandey as third. Sagarmatha restaurant, run by Deepak Bista, sponsored prizes for the winners. All participating members were awarded with certificates.

Young and old all participated the celebration. The gathering not only saw literature lovers but political and human rights activists as well. Additionally, two awards announced on the occasion. Mahabir INLS Award carrying NRs 10,000 and Adhikari Sahitya Puraskar carrying cash prize of NRs 7,500 will be awarded on Laxmi Janati to books and articles published by Nepalis living outside of Nepal.