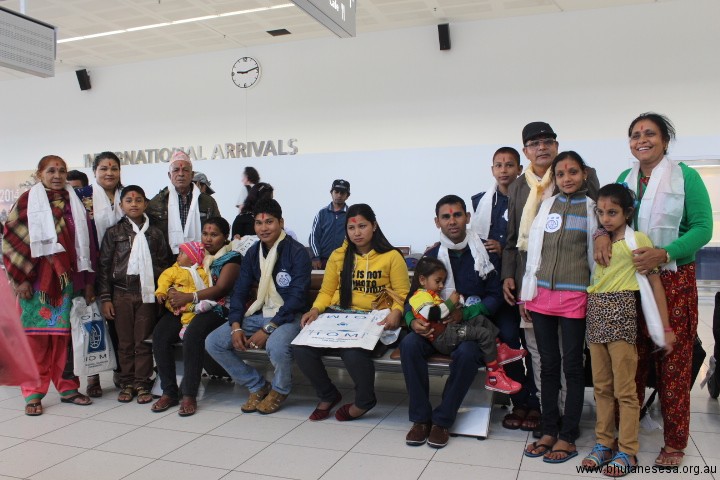 The first group of people from refugee camps in Nepal under the  of Australian Government for 202 visas arrived in Adelaide, South Australia.

Four families arrived yesterday(03/04/2014) at 8.00 am (Adelaide local time) who were welcomed at the airport by their families, relatives/proposers and representatives of Bhutanese Australian Association of South Australia (BAASA). BAASA Chairperson, Mr. Kamal Dahal welcomed the families to Australia by offering khada. BAASA Secretary, Jai Narayan Bhandari, Public Officer, Tika Katel and Housing Co-ordinator, Chitra Gautam were also present at the Adelaide airport when they arrived.

After welcoming the new arrivals to Adelaide, South Australia they were taken straight to Centrelink city office by their relatives or proposers and BAASA volunteers for registration to Centrelink, Medicare and Bank.

Special Humanitarian Program was recently introduced by the Australian Government for Bhutanese Refugees after the previously declared 5000 quota under Global Humanitarian Program was fulfilled. The Australian government has decided not to stop bringing Bhutanese refugees to Australia after the completion of previously agreed 5000 quota by Rudd government, but introduced the new process and visa category for new entrants after 5000 quota was fulfilled, where they (interested to resettle in Australia) need a proposer to propose and sponsor them to come to Australia. We are expecting more families in coming weeks and months to reunite with their families who have arrived in Adelaide earlier. Four to six families are arriving in Adelaide within the month of April 2014 and even more the following month. BAASA is helping the community members every Thursday and Saturday to fill up the proposer forms for proposing their family members or relatives who are still living in refugee camps.

Bhutanese Australian Association of South Australia (BAASA) is an inclusive, non-for profit organization, which strives to the service of the Bhutanese community resettled in South Australia. It was formed in 2009 with the mission to work collectively, in good faith, to provide the community members with wide ranging services and security, and to help realize all-round progress and prosperity.